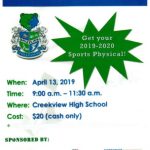 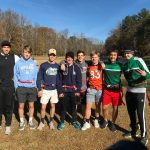 Several members of the Creekview Men’s Soccer Team took time from their Thanksgiving breaks to play a spirited game of flag football. After some hot chocolate and snacks, the boys and some girls were ready to play. There were so many players that four teams were formed, and two games were played simultaneously. There was

Monday, April 17, 2017 7:45 PM Allatoona High School AWAY 0 Creekview High School HOME 1 Game Recap Creekview played powerhouse (#4) Allatoona and went toe to toe. Creekview matched Allatoona’s intensity all night and refused to quit even when playing a man down in the second half. Kyler Padgett made a blistering run into

No Events This Week

Events are added by athletic staff.
View All Events